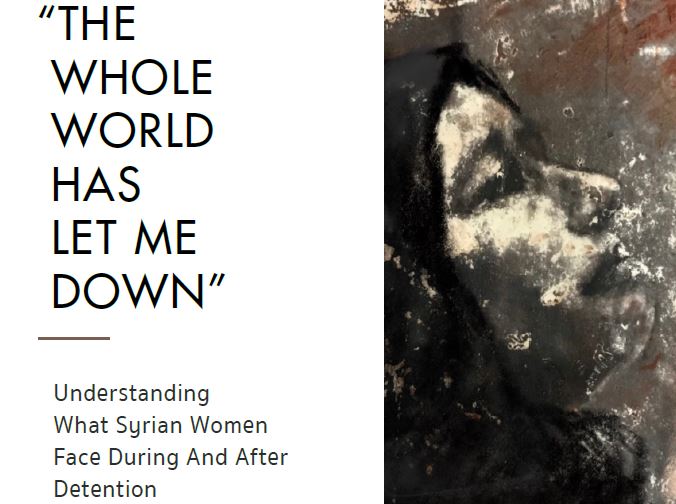 “The Whole World Has Let Me Down”: Understanding What Syrian Women Face During and After Detention

It is with pleasure that LDHR shares with you one of our most recent reports “The Whole World Has Let Me Down”: Understanding What Syrian Women Face During and After Detention, elaborated in close cooperation with Synergy for Justice.

Our first human rights report, called Voices from the Dark, revealed the stories and impacts of sexual violence and torture inflicted on eight women. It shed light on the brutal physical abuse, terror, and psychological harm that was and continues to be inflicted on both women and men held in detention. In this new and expanded report, Synergy and LDHR present the lived experiences of 80 women who were detained, as well as the incidence and patterns of illegality and violence they endured.

The information contained in this report is shocking to read and digest. For each type of violence, the voices of the women and girls describe what happened, bringing the horrific reality of detention to life and illustrating the devastating human cost of this abuse. The courage of these women and girls make it a moral imperative for us to read on, to bear witness, to demand justice and to do whatever we can to prevent repetition. Each one of these women and girls deserve to have their whole stories told in court to bear witness to their stories and ensure that justice is served.

The findings in this report demonstrate a pattern of arbitrary detention, brutality, and sexual violence against Syrian women who either opposed the Syrian regime or whose male relatives did. The campaign to terrorise and break opposition begins with violent arrests, and continues through violent interrogations, sexual assault, witnessing the torture and death of others around them, and through life-threatening conditions of detention. They are often held incommunicado from families and without access to lawyers or any protection. The impacts, which pervade into almost all aspects of the women’s lives, are effective at delivering the regime’s intended objectives. Many have ended up displaced across borders, driven by fear, often away from their families and communities.

The ripple effects have broken lives and families apart, and separated these women through stigma from their communities and from community support. Even having survived detention, they face the risk of self-harm through the severe psychological and social consequences of detention and the crimes committed against them.

LDHR’s medical expert evaluations and these women’s testimonies as survivors and witnesses would support criminal prosecutions for crimes against humanity, murder, extermination, enslavement, deportation and forcible transfer, unlawful arrest, torture, cruel and inhumane treatment, sexual violence including rape, sexual slavery, and other forms of sexual violence, persecution based on gender, politics, and religion, and other inhuman acts. Many indicate the direct involvement and knowledge of senior members of the State security apparatus and the judiciary. Furthermore, as a collective, they demonstrate patterns of collaboration and knowledge across different branches and institutions as a whole system of torture, ill-treatment, and violence.

The women and girls who have survived detention need help. They need safe, confidential access to support services, including medical care, sexual and reproductive health, psychological support, social support through supported survivor groups and tackling social attitudes and stigma, economic and livelihood support, and legal assistance. The strength, resilience and ability of each of these women and girls led them to seek medical evidence to support their access to justice. We need to support their agency and recovery by creating safe and effective avenues for accountability, justice, and reparation. With concerted political will and funding to back that up, comprehensive, effective responses are possible to secure justice and other needs.

We must also not forget the women and girls who have not been released – and who have either died in detention or who remain in life-threatening conditions there. The urgency on this matter cannot be overstated. UNSC Resolution 2268 requires states to act to get those women to safety. Finally we must not forget that more women and girls continue to be arrested by the regime as their tyranny continues. Without intervention and action, they too will face a fate similar to those in this report.

You can find the report here: https://drive.google.com/file/d/1JBgc1UDtzKfqj65QKpMXI0TFjxIy8qXO/view?usp=sharing

Previous post Lacking Legal Basis: An Analysis of Arbitrary Arrest and Detention of Women in Syria Next post Press Release