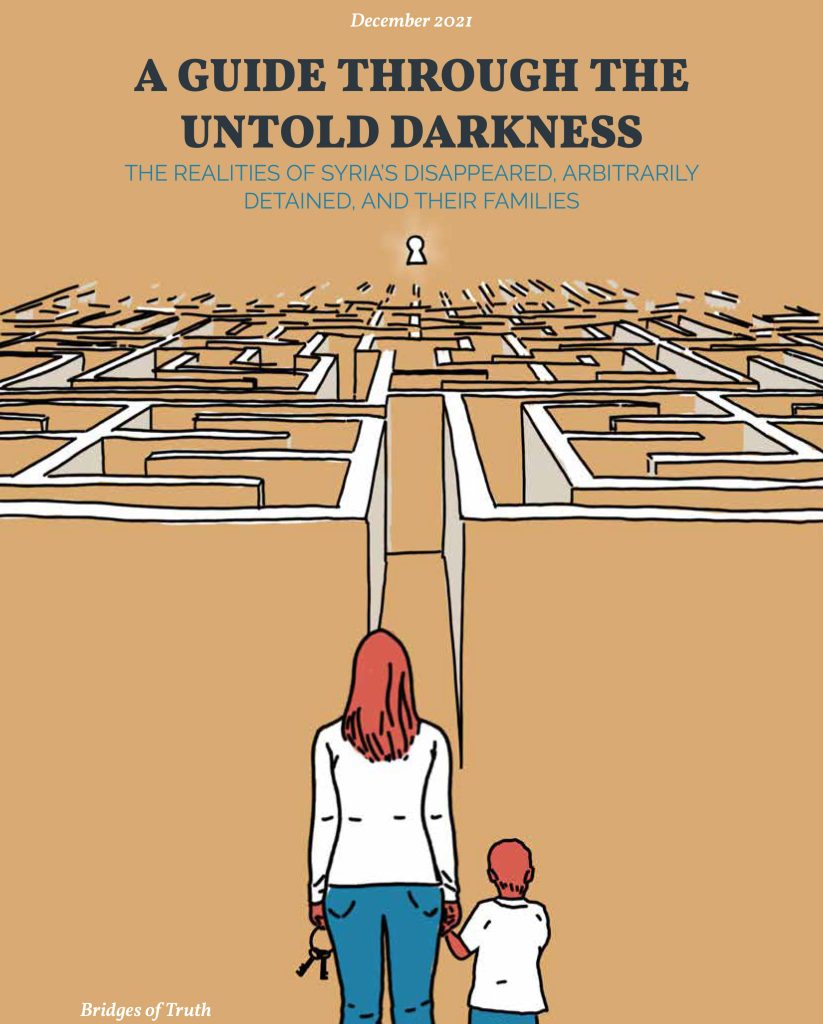 New York, February 28, 2022 —“There can be no peace in Syria until the rights of the wrongfully detained, disappeared, and their families are fully restored,” warns a new publication released today by the Bridges of Truth, a collaborative of eight Syrian civil society organizations and ICTJ. A Guide to the Untold Darkness: The Realities of Syria’s Disappeared, Arbitrarily Detained, and Their Families is the latest product from the Bridges of Truth, which for four years has been raising awareness about the plight of Syrian victims, promoting their rights, and advancing justice for the crimes they experienced.

The Bridges of Truth team originally intended the guide to be used by families of the disappeared, abducted, and detained in Syria to help them navigate their search for their loved ones and life more generally. “The more the team considered the myriad issues and spoke to those affected, the clearer it became that the situation is so dire for families that there are few viable avenues they can pursue that do not involve risky activities like bribing officials or paying questionable actors that could make them vulnerable to exploitation or worse,” explains Nousha Kabawat, Head of ICTJ’s Syria program.

The guide instead takes readers on a journey all too familiar to many Syrians, from the immediate aftermath of a loved one’s disappearance—and the frantic search for answers—through the painful process of settling the disappeared person’s affairs. Based on interviews and focus group discussions with 28 victims (and previous testimonies of 13 others), each section examines a different topic from the perspective of individual victims and their families, and closes with recommendations directed at the Syrian regime, though fully aware it has so far demonstrated little interest in protecting its people, upholding human rights, respecting its obligations under international law. The guide also provides recommendations for how other actors can assist victims and their families in their search for truth, justice, and repair.

Today, tens of thousands of people remain in incommunicado detention in Syria’s many prisons and in makeshift facilities operated by regime allies or non-state armed groups. “The widespread and systematic nature of these violations must be understood for what it really is: the Syrian regime’s total and blatant disregard for its people and their basic rights, including the right to life, a fair trial, and freedom from torture,” stresses Nour El Bejjani Noureddine, Head of ICTJ’s Lebanon program and expert on Syria.

“If the families of the disappeared, abducted, and detained are to regain even a semblance of normalcy in their lives,” the guide concludes, “changes will need to be made to the legal, economic, social, and cultural frameworks to address the many burdens families face not only in Syria, but also abroad.”

Civil society organizations and others who routinely assist these families as they try to rebuild their lives cannot and should not shoulder this responsibility alone. Policymakers and leaders in international bodies, legislative chambers, and state and religious institutions all have a role to play, especially those who write the regulations related to obtaining death certificates, transferring property titles, and other legal and bureaucratic tasks with which families often grapple.

“The guide accurately describes the many and seemingly insurmountable challenges families of the disappeared and arbitrarily detained confront,” says Abbas Moussa of The Day After, a Bridges of Truth partner organization. “At the same, it offers useful guidance and practical recommendations for Syrian and international stakeholders.”

You can access the Guide through the following link: